68% of the Israeli public supports freedom of choice in marriage 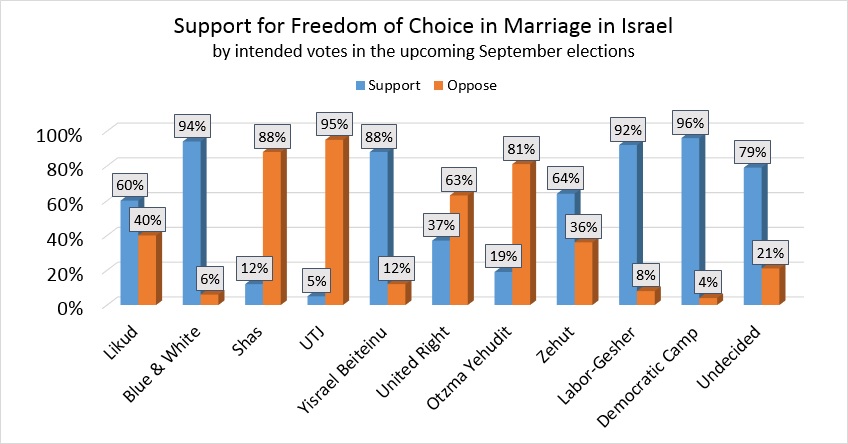 A large majority of voters for Israel’s civil parties, including the Likud, want freedom of marriage, and given the central role that religion/state issues are playing in the current election campaign - We may be closer than ever before to forming a coalition that will finally grant Israelis this fundamental right.

68% of the adult Jewish public in Israel supports Israel recognizing all types of marriage, including civil, Conservative and Reform. Only 50% of the public would have opted for Orthodox marriage ceremonies if freedom of choice in marriage were legally allowed in Israel, and among secular Israelis - only 19%! According to a survey conducted this week by the Smith Polling Institute for Hiddush – For Religious Freedom and Equality for the Jewish holiday of love, Tu b’Av, which will be celebrated this Thursday.

Most voters for all of Israel’s civil parties are in support of freedom of choice in marriage: 94% of Blue-&-White voters, 88% - Yisrael Beiteinu, 96% - The Democratic Camp, 92% - Labor-Gesher, and even 60% of Likud voters support marriage freedom in Israel. Among undecided voters - 79% support it.

These findings are in sheer contrast to the reality in which Israel is the only western democracy in the world that denies its citizens freedom of marriage, limiting them to only religious marriages, and in the case of Jews – conducted only by Orthodox rabbis authorized by the Chief Rabbinate. This reality results in hundreds of thousands of citizens not being able to marry at all, and in millions of others being forced to marry in ways that conflict with their beliefs and lifestyles.

The findings of the survey indicated that the announcements of the Blue-&-White, Yisrael Beiteinu, and Democratic Camp parties that they will all move to legislate marriage freedom, are well grounded in the will of their voters, as well as that of the majority of the adult Jewish public. On the other hand, the Likud's commitment to perpetuate the Orthodox monopoly over marriage of Jews in Israel not only flies in the face of the will of the majority of the public, but even goes against the will of most Likud voters.

This year, the Freedom of Marriage Survey is of particular importance. A large majority of voters for the civil parties, including the Likud, want freedom of marriage, and given the central role that religion and state issues are playing in the current election campaign - We may be closer than ever to forming a coalition that will finally grant Israelis this fundamental right, which only Israel, of all the Western democracies in the world, denies its citizens. The absence of marriage freedom not only impacts millions of Israelis, but also drives a wedge between Israel and the mostly non-Orthodox Jewish communities outside Israel, as a direct extension of the “Who is a Jew” conflict, because none of the converts to Judaism converted under the auspices of modern Orthodox or non-Orthodox rabbis, nor the offspring of female converts, are able to legally marry in Israel.

The first question in the survey was: "As of today, marriages and divorces of Jews in Israel are only performed according to Orthodox law. Do you support or oppose Israel recognizing all types of marriage, including Conservative, Reform, or civil marriage?” As mentioned, 68% of those who responded [95% of the sample representing the adult Jewish public] indicated their support. Most of the secular public supports changing the laws of marriage and permitting free choice [89%], as do 77% of the ‘Traditional-not-so-religious’ public, and even 57% of the ‘Traditional-religiously-inclined’ public. On the other hand, only 9% of the ultra-Orthodox public and 23% of the Zionist Orthodox public support this.

The survey also examined the preference of participants in the representative sample, and only 50% responded that they would have preferred an Orthodox marriage if they had been given the choice. In answering the question: "Assuming that all of the following options are legally available and recognized, if you or any of your children want to get married - what framework would you choose for marriage?" 50% of those who responded [88% of the sample] would prefer an Orthodox framework, and 50% would choose an alternative framework [30% - civil marriage; 13% - Conservative or Reform marriage; and 7% - cohabitation without formal marriage].

The distribution according to respondents’ voting intentions is of great interest, in light of the fact that the next coalition may be unlike the last, for a civil unity government may be formed that is not beholden to the demands of the religious parties. Such an outcome would render the possibility of civil marriage in Israel feasible. Only 7% of voters for the Democratic Camp would prefer Orthodox marriage if they were free to choose, as well as only 14% of voters for Yisrael Beiteinu, and 29% of Blue-&-White voters and Labor-Gesher voters. 65% of Likud voters would personally prefer to marry in an Orthodox manner, but at the same time 60% of Likud voters support giving the public a choice in how they get married, as opposed to the current reality, in which only Orthodox marriage is legal under Israeli law.

The survey was conducted by the Smith Polling Institute on August 6-11 among 753 people as a representative sample of the adult Jewish population in Israel. Sampling error - ±3.6%.