A revolution: About half of the Jewish public would prefer not to get married via the monopolistic, state empowered Chief Rabbinate 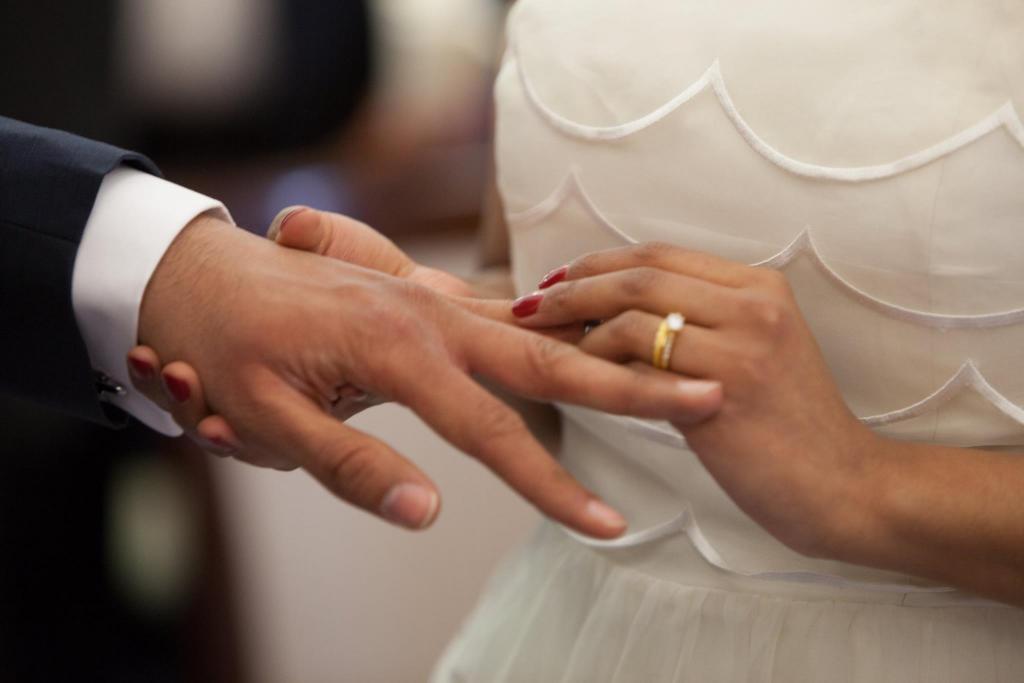 Photo: A bride putting a wedding ring on her groom's finger

The 2016 Israel Religion & State Index (the seventh annual R&S Index, conducted by the Smith Polling Institute and published by Hiddush) shows a dramatic increase in the percentage of respondents who would prefer to have weddings outside the auspices of the Chief Rabbinate for themselves and their children. In 2015, 37% of Israeli Jews expressed this personal preference, compared to 47% who voiced this in 2016. Of these, 26% prefer to have civil marriages, 15% want Reform or Conservative wedding ceremonies, and 6% would prefer to cohabitate without getting officially married at all, assuming that all of these alternatives were legally recognized by the State of Israel.

This particular question is of great significance because it reflects Israelis' personal preferences for themselves and their children, rather than their theoretical support for marriage freedom. A popular claim in Israeli public discourse is that if civil marriage were implemented there wouldn't be much demand for it, but the dramatic increase in respondents who would prefer not to get married via the Chief Rabbinate flies in the face of this assertion. We have no doubt that when these marriage alternatives become officially recognized by the State, the majority of Israelis will opt for wedding ceremonies that reflect their values and ways of life. Israelis, ranging from secular to Zionist Orthodox moderates, would prefer weddings that are more egalitarian than those permitted by the Chief Rabbinate (see Hiddush's poll for Tu b'Av, the holiday of love). 92% of the secular Israeli public prefers egalitarian wedding ceremonies with ring exchanges and egalitarian wedding contracts; as do 74% of adult Israeli Jews, 31% of Zionist Orthodox Jews, and 51% of Jewish Home party voters.

As noted, the previous question, which is an annually repeated question in the Religion & State Index, deals with a hypothetical reality in which the State of Israel equally recognizes Orthodox marriage, civil marriage, and Reform or Conservative marriages. This time, we also asked the respondents a new Index question which accounts for the current reality, in which the State of Israel only recognizes Orthodox weddings performed in Israel and civil weddings performed abroad.

Given the current legal reality, 67% of Israeli Jews would prefer to have Orthodox weddings ceremonies, and 33% would prefer an alternative. 23% (nearly one-quarter) would prefer civil marriage abroad with an unrecognized ceremony in Israel (17%) or without a ceremony in Israel (6%). 10% would prefer a private wedding in Israel unrecognized by the State and unregistered with the Interior Ministry. Even in the current reality, given the Chief Rabbinate's official monopoly on Jewish marriage and divorce, most Israeli secular Jews would prefer not to have Orthodox weddings. Interestingly, among Zionist Orthodox moderates, more than a quarter (26%) would prefer to get married outside of the Rabbinate, 16% of which would prefer private wedding ceremonies in Israel (most likely Orthodox weddings) that wouldn't be registered with the Rabbinate. A comparison of the findings of these two questions underscores how profoundly the Rabbinate's legalized religious coercion and Israel's denial of legal marriage alternatives causes much of the Jewish public to fear for the social status of their children and themselves.

Notably, only 16-17% of Jewish marriages registered in Israel are performed abroad (in most cases these involve a spouse who is not Jewish according to the Rabbinate's interpretation of traditional Jewish law). In other words, it seems that many Israelis abide by the Rabbinate's coercive marriage monopoly due to outside pressures such as their relatives' preferences, the desire to have a halakhic wedding ceremony recognized by civil law, the (groundless) concern over the effects of an alternative wedding ceremony upon the halakhic status of one's children, and the desire to be "like everybody else."

And - the fundamental annual Index question on marriage: level of support for Israel's official recognition of all forms of marriage, including Reform, Conservative, and civil. 66% of respondents expressed their support for this (compared to 64% last year). Among secular Israelis, support stands at 90%, and among traditional Jews support stands at 62%. A significant difference emerged between male and female respondents: 72% of women expressed their support, compared to only 59% of men.

Among voters for the civil Government Coalition parties: 63% of Likud voters, 71% of Kulanu voters, and 83% of Yisrael Beiteinu voters support official state recognition of all forms of marriage (an average of 69% among all three). 77% of voters for the ultra-Orthodox parties and the Zionist Orthodox Jewish Home party are opposed. The difference in levels of support between politicaly left leaning and right leaning respondents was fairly high, likely because most Zionist Orthodox and ultra-Orthodox Jews identify as right leaning. 55% of right leaning voters are opposed to official recognition of all forms of marriage, while 85% of centrist voters and 100% of left leaning voters support this.

In the past year, Hiddush has commissioned a comprehensive series of public opinion surveys on matters of marriage and divorce freedom, which Hiddush believes are central to the battle of religious freedom and equality in Israel. One such public opinion survey [link] found that 71% of Israeli Jews consider the matter of marriage and divorce freedom (given the Rabbinate's official monopoly on Jewish marriage and divorce in Israel) among the two most important battlegrounds of religion and state, far higher than any other contentious issue. That survey also addressed the question of American Jewish advocacy for marriage freedom in Israel, which is significant, for American Jewry for many decades had avoided intervening in Israel's religion & state battles, except for the struggles over "Who is a Jew," and more recently - the struggle over egalitarian worship at the Western Wall. The survey revealed that 60% of Israeli Jews welcome support from the American Jewish community in promoting marriage freedom in Israel. The North American community's recent marriage freedom initiatives such as the JFNA's IREP and the AJC's JREC intitiatives have public support in Israel. Clearly, Israelis feel a need for partnership in the battle to overcome the official monopoly granted to the Chief Rabbinate by the Government, for the civil coalition parties continue to concede all matters of religion & state to the ultra-Orthodox parties in exchange for their political support.

Another finding of note in this regard is that there has been a dramatic increase in support for official State recognition of marriage or civil unions for same-sex couples in Israel, as measured by another survey [link] conducted by Hiddush this year. Three-quarters of the Israeli Jewish public (76%) believe Israel should allow same-sex couples to get married (64%) or have civil unions (12%). Many series in recent year indicated that support for same-sex marriage in Israel stood at 60-65%, so this latest survey indicates a dramatic rise in support. Another finding of consequence is that no less than 80% of Israeli Jews (and 71% of voters for the Zionist Orthodox Jewish Home party!) support granting same-sex couples the same rights and privileges that are granted to heterosexual couples.