87% believe that the rabbinical courts should force husbands to grant their wives divorces in cases of domestic violence. 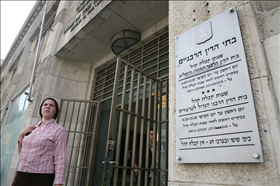 The day will soon come when the public expresses its opposition to the government’s policies in matters of religion and state at the ballot box, turning its back on Israel's cynical politicians who ignore the plights of Agunot and betray the will of the public.

International Agunah Day is marked annually on the Jewish Fast of Esther. Stories of women who are not ‘released’ from their Jewish marriages by recalcitrant husbands appear in the media frequently, but the battle to gain women freedom from unwanted marriages is far from being resolved. Like all social ailments, it affects the society as a whole, not only those who suffer from it directly. In Israel it occupies a major place in the overall battle over the unholy alliance of religion and state. Refusal to grant a religious divorce is a violation of human rights and the ideals of equality, personal freedom, marriage, and happiness. The suffering caused by these violations is a burden for both the women themselves and the entire social and political structure that permits such violations to occur. The victims are not only the wives but also the children and the extended families. In Israel, due to the monopolistic authority granted to the Chief Rabbinate over the personal status of all Jews, the State’s official fundamentalist, extreme Orthodox Rabbinic Courts are directly responsible for perpetuating the plights of thousands Agunot, rather than finding solutions to their suffering. The State Rabbinical Courts are ever striving to expand their reach also into the lives of non-Israeli Jews who visit Israel. 90% of Jewish Israelis, including most of the Zionist Orthodox community, want to change the reality that thousands of women cannot escape their marriages because their husbands refuse to divorce them or make unjust financial demands of them as a condition to their ‘releases’ from their religious Jewish marriages. This overwhelming majority believes the rabbinical courts should force the husbands to grant them divorces. Of these, 47% believe that Israel should establish a recognized alternative civil route to marriage and divorce. The other 43% believe that the rabbinical courts should be pressured to find solutions to the suffering of Agunot. Only 10% of Jewish Israelis support maintaining the current state of affairs without need for change.

In reaction to a Jerusalem Rabbinical Court's recent rejection of a battered wife's divorce suit, 87% of the public believes that the Rabbinical Courts should require husbands to grant their wives divorces in cases of domestic violence. Only 13% maintain that because the Rabbinical Courts hold the authority to interpret Jewish Law their decisions should not be interfered with. Following the attacks of Israeli politicians and religious leaders against the Supreme Court regarding its decisions on matters of religion/state and other issues that conflict with the policies of the Government and the Orthodox political and rabbinic establishment, Hiddush explored the public's levels of support for Israel's four relevant key public institutions: The Knesset, The Government, The Rabbinate, and The Supreme Court. 59% of the Jewish public said they most trusted the Supreme Court, which was 3.5x times the public confidence enjoyed by the Chief Rabbinate (only 16% most trusted it). Only 12% expressed confidence in the Government, and only 13% responded that they most trusted the Knesset.

It's time to change course and do away with the monopoly Israeli politicians have granted to the Orthodox Rabbinic establishment over personal status matters of all Jews in Israel. The current monopoly is not only wrong and immoral but it also stands in clear contradiction to the will of the overwhelming majority of Israeli Jews. Fundamental change is urgently needed, especially given that the rabbinical establishment is controlled by extremist ultra-Orthodox elements, responsible for creating thousands of agunah tragedies, and it denies basic rights and the freedom of divorce & marriage to hundreds of thousands. The public will ultimately express its opposition to the politicians' cynicism and indifference to the plights of thousands of agunot at the ballot box. Politicians on both the Right and the Left have collectively caused untold damage to religious freedom and equality in sharing the civic burden. The survey was conducted by the Smith Polling Institute for Hiddush – Freedom of Religion for Israel on the occasion of International Agunah Day, which falls on the annual Fast of Esther, March 9, 2017. The survey was conducted on March 1-2 among a representative sample of 500 adult Jewish Israelis.

90% of Jewish Israelis would like to see a change in the State's policy towards Agunot, including most voters for the non-Haredi Government Coalition parties: Likud (94%), Kulanu (97%), Yisrael Beiteinu (93%), and the Jewish Home (80%). The question was worded as follows: "In Israel today there are thousands of women agunot who are unable to get free of their marriages because of their husbands' refusals or financial demands, and/or the rabbinical courts' failure to require divorce documents of their husbands. What do you think would be a more effective way of dealing with this situation?" 47% responded that an alternative civil track for marriage and divorce should be officially established by the State of Israel. 43% responded that the rabbinical courts should be pressed to alleviate the suffering of agunot and facilitate their divorces, including 53% of ultra-Orthodox and 56% of Zionist Orthodox Israelis. Only 10% believe that the current situation is reasonable and does not require any change. The survey also examined public opinion on the recent ruling of the Jerusalem rabbinical court, in which it denied a divorce to a battered wife who is the victim of domestic violence, for which her husband has been convicted in court. 87% agreed that "the rabbinical court should rule to demand a divorce in every situation when the husband uses violence against his wife and she demands a divorce." 55% of ultra-Orthodox and 78% of Zionist Orthodox Jews agree with this position. Only 13% of Jewish Israelis believe that the rabbinical courts should not intervene on the wife's behalf and interpret Jewish religious law in favor of permitting them to get divorced. The primary supporters for this position are ultra-Orthodox (45%); only 5% of secular Jews agreed with it. In terms of distribution by voters in the last Knesset elections, 91% of Likud, 98% of Zionist Union, 92% of Yesh Atid, 89% of Kulanu, 82% of Jewish Home, and even 59% of voters for the ultra-Orthodox parties supported granting battered wives divorces from their husbands. Another survey question was as follows: "In which of the following public institutions do you have the most trust?" 59% expressed confidence in the Supreme Court, which is 3.5x the number that expressed confidence in the Rabbinate (16%). Only 13% expressed confidence in the Knesset, and only 12% expressed confidence in the Government. 81% of secular Jewish Israelis expressed their confidence in the Supreme Court, compared to 9% of the ultra-Orthodox public. Most of the confidence enjoyed by the Rabbinate comes from the ultra-Orthodox community (70%), but only 40% of the religious non-Haredi community expressed confidence in the Rabbinate, as well as only 2% of the secular Jewish public. Confidence in the Government was low: among voters in the last Knesset elections, only 28% of Likud voters, 11% of Kulanu voters, 16% of Jewish Home voters, and 21% of Yisrael Beiteinu voters expressed confidence in the Government. Even among Likud voters, the greatest level of confidence was expressed for the Supreme Court (47%); among Jewish Home voters, the greatest level of confidence was also expressed for the Supreme Court (37%).