80% of the Jewish Israeli public supports giving married LGBTQ couples all or most of the same rights and privileges as heterosexual married couples. Hiddush CEO Rabbi Regev: "These results - yet another reason for pride during Pride Month, but the legal and political reality is shameful." 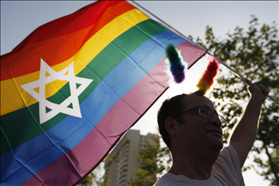 Hiddush monitors public opinion on marriage freedom in Israel, and noted a dramatic increase in support for officially establishing marriage or civil unions for same-sex couples in Israel. Three-quarters of the Jewish Israeli public (76%) say that Israel should allow same-sex couples to legally get married in Israel (64%) or legally register their partnerships (12%) in Israel. A long series of surveys in recent years has shown that public support for same-sex marriage has gradually risen, and has now jumped from 64% in the last poll to 76%, representing a tremendous leap forward. A complimentary and no less far-reaching data point: no less than 80% of Israeli Jews favor granting married same-sex couples all (75%) or most (5%) of the legal rights and privileges granted to heterosexual married couples.

The survey results are a source of pride and a badge of honor for the Israeli public during Pride Month, but the political and legal reality in Israel is shameful! Israel not only denies same-sex couples the right to marry, against the clear public will, but also denies hundreds of thousands of heterosexual couples the right to family because it granted exclusive monopoly over Jewish marriages to the Orthodox Rabbinate. This political reality also forces more than a million and a half additional citizens to marry in ceremonies that do not befit their beliefs and lifestyles. The data prove that the establishment of legal marriage for same-sex couples and religious freedom in general have practically become the public consensus of the Israeli Jewish population. The public's will has never been translated into legislation because all successive Israeli Governments, from both the left and the right, have instead traded away the public's freedom of marriage and divorce to the Orthodox parties in exchange for their political support.

Israel remains the only Western democracy in the world, which severely restricts the freedom of marriage. In fact, nearly ten percent of the population cannot marry at all. 42 countries now allow for marriage or legal registration of same-sex couples. In other words, the gap between Israel and the rest of the enlightened world in the arena of LGBTQ rights is only increasing. Israel's Government will only abandon its long-held, shameful tradition of surrendering the fundamental right of marriage freedom if the public wakes up and expresses its concern over this critical issue and Jewish communities from around the world join in the demand for freedom of marriage, so that all children growing up in those same Jewish communities will be treated equally and with dignity and respect in Israel for their Jewish choices.

The survey question was phrased as follows: "In your opinion, should same-sex couples be allowed the right of marriage or partnership registration in Israel?" 76% of respondents answered affirmatively, and only 24% answered in the negative. 90% of the secular Jewish public, 77% of traditional Jews, and 46% of Zionist Orthodox Jews (of which 29% support legalizing same-sex marriage) support this initiative. Encouragingly, among immigrants from the former Soviet Union, a population that is considered very conservative on LGBT rights, support for establishing same-sex marriage or registration of same-sex partnerships has risen to 74% - almost as high as that of native Israelis.

74% of Likud voters support Israel establishing same-sex marriage (57%) or same-sex registration of partnerships (17%), as did a majority of the other non-Haredi Government Coalition parties: including 93% of Kulanu voters, 80% of Yisrael Beiteinu voters, and 57% of Jewish Home voters. Only the ultra-Orthodox parties' voters were opposed - 73% of Shas voters and 95% of United Torah Judaism voters responded in the negative. Among the centrist and left-wing parties, voters are mostly in favor of establishing same-sex marriage or partnership: 89% of Yesh Atid, 95% of Meretz, and 98% of Zionist Union voters expressed their support.

As stated above, this represents a dramatic increase of support compared to previous surveys, which asked similar (although not identical) questions. Hiddush's annual Israel Religion and State Index, which is the most comprehensive public opinion report on matters of religion and state in Israel, has included the following question in several iterations: "In your opinion, should civil marriage or civil partnerships also be available for same-sex couples?" In 2009, barely a majority of Jewish Israelis responded in the affirmative, and in 2015 public support rose to 64%, which is is till significantly lower than the current level of support in the most recent survey: 76%. Even the more comprehensive survey conducted for the Israel Marriage Freedom Coalition in 2014 by Dr. Mina Tzemach (which used a sample size of 1,000) revealed that 63% of Israeli Jews supported civil marriage or partnership registration for LGBTQ couples.Another data point from the recent survey compliments the increased public support for same-sex marriage: 80% of respondents said that if civil marriage for same-sex couples were to be instituted in Israel, or if same-sex partnership registration were to be recognized, LGBTQ couples should be granted all the same rights as heterosexual married couples (75%) or most of the same rights and privileges (5%). Only 5% of Jewish Israelis believe that LGTBQ couples should receive many fewer rights than heterosexual married couples, and 15% responded that Israel should not legalize same-sex partnerships at all. 91% of secular Jews support granting same-sex couples all or most of the rights and privileges received by heterosexual couples, as do 86% of non-Haredi Jews and 76% of immigrants from the former Soviet Union. The political breakdown of views among the non-Haredi Coalition parties is as follows: 75% of Likud voters and Yisrael Beiteinu voters support granting rights to LGBTQ couples, as do 100% of Kulanu voters and 71% of Jewish Home voters(!).

Israel's Government will only abandon its long-held, shameful tradition of surrendering the fundamental right of marriage freedom if the public wakes up and expresses its concern over this critical issue.