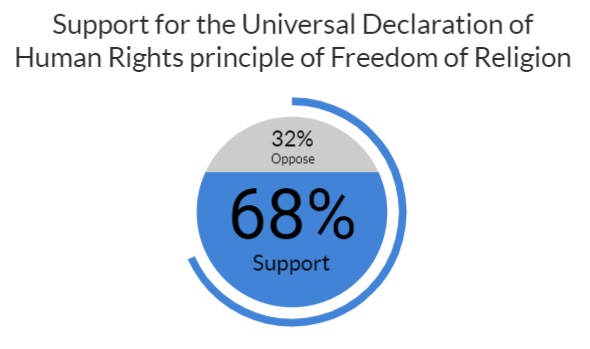 On December 10th the world marks International Human Rights day. Hiddush looked into one of the main violations of human rights in Israel, which ironically mostly harms Jews: The right to marry!

A special poll commissioned by Hiddush shows that 68% of Israel’s adult Jewish public supports the principle set out in the Universal Declaration of Human Rights: "Men and women of full age, without any limitation due to race, nationality or religion, have the right to marry and to found a family."

Furthermore, 70% support the recognition of Reform and Conservative marriages by Israel, on equal footing with Orthodox, which are currently the only option for legal marriage of Jews.

These are the key findings of a special survey commissioned by Hiddush – For Freedom of Religion and Equality, measuring the positions of Israel’s adult Jewish public. The survey was conducted by the Smith Polling Institute. The survey clearly demonstrates that a majority of those who voted for the non-religious Coalition partners in the 2015 elections want to see the State of Israel recognizing the right to marriage for all (63% of Likud and 72% of Kulanu voters), as well as a great majority of voters for the opposition parties (over 90% of Zionist Union, Yesh Atid, and Meretz voters, as well as 70% of Yisrael Beiteinu voters). Among voters for the Jewish Home, too, nearly half support this view (44%).

It is noteworthy that the support among women is significantly greater than that of men (73% and 64%, respectively). Among unmarried couples support is at 76%. A majority of the secular Jewish population (86%) supports this, as does a majority of the ‘traditional – not so religious’ (76%), ‘traditional – religious’ (64%), and even among the Zionist Orthodox public there is substantial support (30%).

The Universal Declaration of Human Rights was adopted by the United Nations on December 10, 1948. Since then International Human Rights Day is observed on that day throughout the Western world.

On International Human Rights Day it is important to raise awareness that hundreds of thousands of Israeli citizens are denied the basic human right to marriage, due to the religious coercion. The governmental policies contravene the promise of freedom of religion and conscience enshrined in Israel’s Declaration of Independence. It is contrary to the will of the overwhelming majority of the Israeli Jews, and the government betrays even its own voters! Hiddush’s regular, periodic polling underscores not only the public's support for the principles of freedom of marriage and religious pluralism, but they also show that most of the Israeli public wants the state to establish civil marriage and expresses clearly the preference for marriage outside the monopolistic Orthodox Chief Rabbinate! The data were obtained from a telephone survey conducted on November 6-7, 2018 among 500 people, serving as a representative sample of the adult Jewish population (ages 18 and over). Sampling error - ± 4.5%.

On International Human Rights Day it is important to raise awareness that hundreds of thousands of Israeli citizens are denied the basic human right to marriage, due to the religious coercion. The governmental policies contravene the promise of freedom of religion and conscience enshrined in Israel’s Declaration of Independence.