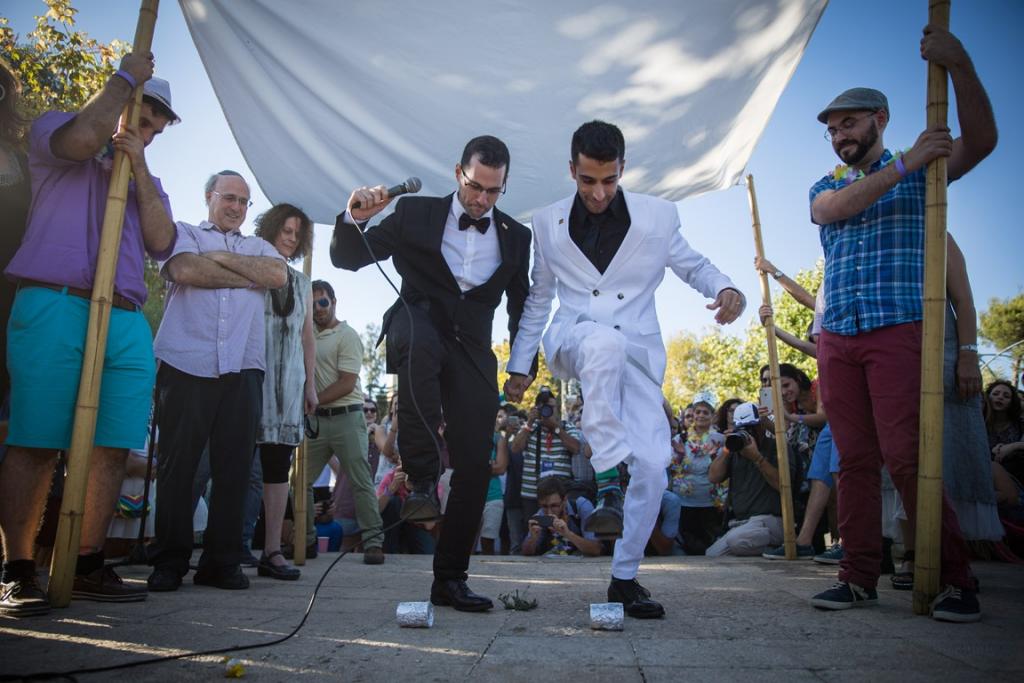 Support for the implementation of marriage or civil unions for same-sex couples in Israel: 79% of the Jewish Israeli public believes that same-sex couples should be permitted to marry (60%) or have civil unions (19%). These findings arose from a Hiddush-commissioned survey conducted by the Rafi Smith Polling Institute among a representative sample of Jewish Israelis in honor of the Pride Parade, which is taking place this year on June 9th in Tel Aviv. This reflects a consistent increase in public support for the official establishment of state recognized same-sex partnerships in Israel, which stood at 76% in 2016 and in previous years ranged from 60-65%.

These survey results are a source of pride and a badge of honor for the Israeli public, but the political and legal reality in Israel is shameful! Israel not only denies same-sex couples the right to marry, against the clear public will, but also denies hundreds of thousands of heterosexual couples the right to family because it granted exclusive monopoly over Jewish marriages to the Orthodox Rabbinate. This political reality also forces more than a million and a half additional citizens to marry in ceremonies that do not befit their beliefs and lifestyles. The data prove that the establishment of legal marriage for same-sex couples and religious freedom in general have practically become the public consensus of the Israeli Jewish population. The public's will has never been translated into legislation because all successive Israeli Governments, from both the left and the right, have instead traded away the public's freedom of marriage and divorce to the Orthodox parties in exchange for their political support.

Israel remains the only Western democracy in the world, which severely restricts the freedom of marriage. In fact, nearly ten percent of the population cannot marry at all. 42 countries now allow for marriage or legal registration of same-sex couples. In other words, the gap between Israel and the rest of the enlightened world in the arena of LGBTQ rights is only increasing. Israel's Government will only abandon its long-held, shameful tradition of surrendering the fundamental right of marriage freedom if the public wakes up and expresses its concern over this critical issue and Jewish communities from around the world join in the demand for freedom of marriage, so that all children growing up in those same Jewish communities will be treated equally and with dignity and respect in Israel for their Jewish choices.

The gulf between the Israeli public will and the government's policies is widening. While the Jewish public is increasingly open and supportive of the realization of individual freedoms in the spirit of Israel's Declaration of Independence, which promised freedom of religion and conscience for all, the Israeli government coalition kowtows to the ultra-Orthodox political parties, perpetuating State enforced religious coercion and infringement of civil rights and human dignity in Israel. These important findings give us a foundation for hope and pride that the necessary change will come, and Hiddush will do its best to ensure that it will come soon.

The wording of the survey question was as follows: "Do you think same-sex couples should be permitted to marry or have civil unions in Israel? (A civil union is not a marriage, but it grants similar rights and responsibilities)." 79% of respondents said yes, and only 21% said LGBTQ couples should not be allowed to formalize their partnerships in Israel. Among secular Israeli Jews, 92% expressed their support, and among Zionist Orthodox Israelis support was at 47%. Another surprise: among immigrants from the former Soviet Union who tend to be conservative when it comes to LGBTQ relationships, support increased dramatically to 85% from 74% last year.

84% of Likud voters support same-sex marriage (55%) or civil unions (29%), as do 90% of Kulanu, 83% of Yisrael Beiteinu, and 65% of Jewish Home party voters. In other words, a majority of voters for all of the non-Haredi government coalition parties support same-sex marriage or civil unions. Among voters for the opposition parties, 100% of Zionist Union voters and Meretz voters and 94% of Yesh Atid voters expressed their support.

As noted, this is an increase in support compared to last year's survey and all previous years. For example, in Hiddush's annual Religion & State Index, the following question has been included several times: "Do you believe civil marriage or civil unions should be applicable for same-sex couples?" In 2009, a slight majority of 53% supported the establishment of state recognized partnerships for same-sex couples. In 2015, support reached 64% (still far from the 79% support level in this latest survey). In a comprehensive survey conducted in 2014 by Dr. Mina Tzemach, 63% of respondents expressed support for civil marriage or couples registration for LGBTQ couples.

While the Jewish public is increasingly open and supportive of the realization of individual freedoms in the spirit of Israel's Declaration of Independence, which promised freedom of religion and conscience for all, the Israeli government coalition kowtows to the ultra-Orthodox political parties