60% of the Jewish Israeli public supports the involvement of American Jewish organizations in advancing marriage freedom in Israel. There is no doubt that for Israelis – breaking the yoke of the fundamentalist Orthodox Rabbinate in marriage and divorce is a top priority among the religion/state battles. Israelis welcome American Jewish partnership in advancing this cause, both for the sake of Israel and for the sake of world Jewry! 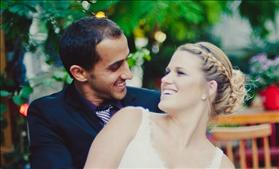 Photo: A young Jewish couple at their wedding, not recognized by the Israeli Chief Rabbinate

This survey was conducted by the Rafi Smith Polling Institute for Hiddush – Freedom of Religion for Israel. It polled Israelis on their priorities regarding the battles over religion and state in Israel, as well as their attitudes towards the involvement of Diaspora Jewry in these battles. The survey was conducted on March 29, 2016 in an online panel of 500 individuals, a representative sample of the adult Israeli Jewish population. This survey was conducted with generous support from IREP - the Israel Religious Expression Platform.

The survey results demonstrate the support of Israelis for American Jewish involvement in the struggle for religious freedom in Israel in general and for marriage freedom in particular. It is critical as a counterbalance to the political extortion of the Haredi parties, which is antithetical to the clear will of the people and to the core principles of democracy and civil society. As long as the Orthodox Rabbinic establishment controls marriage of all Jews in Israel, hundreds of thousands of Israeli citizens are denied the right of marriage in Israel, and the majority of children growing up in today's American Jewish community would be ineligible to get married in Israel, should they wish to make their home there.

Hiddush's survey presents the priorities of the Jewish Israeli public in matters of religious freedom. The battle over freedom of worship at the Western Wall is clearly a justified and important battle. However, if the Jews of the Diaspora are interested in strengthening their partnership with Israeli Jews, it is critical to understand that Israelis attach far greater importance to the struggle against the Orthodox monopoly over marriage and divorce. These are issues that affect millions of people's lives, and undermine their dignity and civil liberties. They impact Israelis and Diaspora Jewry equally. There is only one solution – marriage freedom!