43 states permit the foundational right of partnership for same-sex couples. A significant majority of the countries are located in Europe 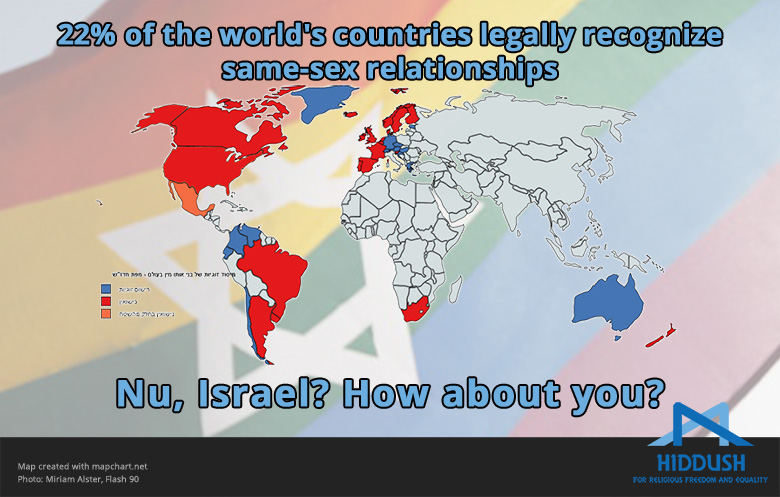 In December 2000, the Dutch parliament approved a law that recognized same-sex marriage in the Netherlands, making them the first country to allow this type of law. Belgium followed suit in 2003. In January 2001, the first same-sex marriage ceremony was held in Canada (the ceremony included one male couple and one female couple) at the municipal church of Toronto. After a year and a half of legal struggles for both couples, the Canadian court ruled that both couples should be legally registered as married.

There are several methods that are employed around the world to legally recognize same-sex partnerships The most prevalent methods are marriage and civil union. Civil unions usually provide the couple with specific rights, similar to the ones that married couples receive, but they do not necessarily enjoy all of the same rights that heterosexual couples do. For example, In some places, civil unions prevent the couple from the right to adopt a child.

Same-sex marriage has been recognized so far in 26 countries. In one country (Mexico), marriage is only available in some regions. Civil union for same-sex couples has been recognized until now in another 17 countries. In total, there are 43 states that allow the foundational right of partnership for same-sex couples, representing 22% ​​of all countries in the world (based upon the 193 UN member states).

From 2003 until the end of 2012, same-sex marriage continued to gain legal recognition at a rate of one country per year, on average. However, since the beginning of 2013 no less than 14 countries have legally recognized same-sex marriage, at a rate of approximately 4 countries per year. The countries added during this period were: Uruguay, Ireland, the United States, Brazil, Britain, Greenland, Germany, Taiwan, Luxembourg, Malta, New Zealand, Finland, France and Colombia.

Whereas in the past, recognition of same sex relationships was primarily a European phenomenon, along with very few other countries around the world, it has become a common phenomenon. The three largest countries of North America allow same-sex marriage. It is legal throughout all of Canada and the United States, and in parts of Mexico. 7 countries, which is most of the countries in South America and which comprise the majority of the mainland area, allow marriage or registration of same-sex couples. The two largest countries on the continent, Brazil and Argentina, recognize same-sex marriage. Also, the two countries on the continent of Oceania, Australia and New Zealand, allow legal partnership for same-sex couples.

However, in Asia and Africa where two-thirds of the world's population is concentrated, there has been no progress. In all of Africa, only South Africa permits the institution of same-sex union, and Taiwan is the only country in Asia to officially recognize same-sex marriage.